Project Anton: When the Old Meets the New

See the slideshow of the children’s artwork here (n.b. this is not a recording of the SFCMP concert)

Grounded in our belief that contemporary music has the potential to engage even community members who have no closeness to classical music per se, the San Francisco Contemporary Music Players (SFCMP) deploys an inclusive overall strategy to engage collaborative projects that are engaging, welcoming, valued, and above all, authentic. A recent example of this was our very-successful October 2012 John Cage Musicircus, realized in partnership with Yerba Buena Center for the Arts. We welcomed over 900 people to the event, and began a deeper engagement with our community. In October, 2013, we served as the lead professional ensemble for the massive Crissy Broadcast, which attracted thousands of individuals for a world premiere of a site-specific work by composer Lisa Bielawa.

The success of these large-scale outreach events informs our plan forward for Project Anton.

As part of our March, 2014 concert, Project Anton uses the past as a touchpoint for defining the present. It centers around a new multimedia work by Bay Area composer Jaroslaw Kapuscinski: Pointing Twice. This new piece, for gramophone soloist, nine musicians, video/computer operator and conductor is itself being commissioned as a response to Anton Webern’s Concerto for Nine Instruments, Op. 24, also on the concert. 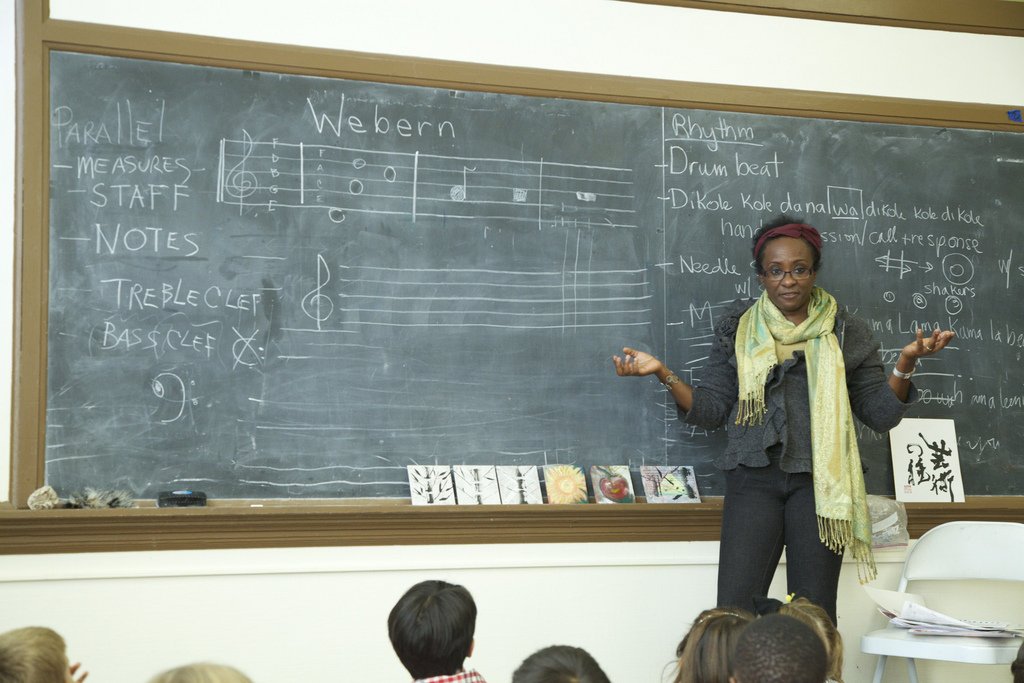 The line of inquiry that interests us in working with young artists mimics the inquiry of the composer. Jarek wants to listen to Webern’s iconic work and interpret a response to it at the compositional level. We seek to construct a parallel creative process with Bay Area youth groups to consider and co-create their own responses to the Webern work. We welcome the “clash of cultures” that can emerge when “non-initiates” to twelve-tone music are invited to respond to it. To put it bluntly, we will begin from a frame of “what does this dead, white, male, European composer possibly have to say to interest me, 21st century urban kid?”

It is our hope that through a process of introduction, immersion, and co-creation, new stylistic dialogue can exist that goes beyond anything Anton Webern could have possibly imagined — but that also brings benefit, enjoyment, and esthetic questioning (and answering) to our young artist collaborators.

One of our core beliefs at SFCMP is that contemporary music has the potential to engage many members of our community, even if they don’t have a stated affinity for classical music. It is to our advantage that the public at-large has many emotive and indirect aesthetic/”crossover” connections to new music (through jazz, pop, world, and other music forms, as well as interdisciplinary and visual arts), even if they do not necessarily have experiential ones. It’s our aim to leverage this “esthetic upside” and forge a place at the community table for new music.

We also consider it to our advantage that new music has more “crossover appeal” in many instances – thanks to electronic music, tribal/ethnic polyrhythms, trance music, tape loops and other techniques that pop and underground culture have adopted from 20th century maverick composers. Some audiences will never feel comfortable in a strict concert hall experience, and they shouldn’t be made to feel they have to. Our interest is in meeting audiences “where they live” through our field of new music, and seeing what interesting results these encounters can lead to. That’s the beauty and power of art in our landscape today.

In working with our wonderful and experienced partners at ArtSeed, we seek to engage youth who have no a priori connection to Webern’s classical tradition (twelve-tone/atonal music). Often considered a “difficult” genre within 20th century classical music forms, dodecaphonic music (to use the precise term) actually holds interesting promise and relevance in our age, where dissonance, ”noise rock,” rap, electronica, and other popular styles make up an important part of the youth landscape.

Here’s how our Artistic Director Steven Schick frames the line of inquiry:

Anton Webern lived in an impossibly complicated world. His country in Europe had been in the middle of not just one, but two world wars. Towards the end of life, everywhere he looked there was rubble, destruction, enormous poverty, and chaos. How does an artist deal with a world that is spinning out of control? How do you raise your voice above the noise?  Do those sound like questions we could ask ourselves today? yes, perhaps there are more than a few similarities to early 21st America — the chaos, the competition for space, wars and other social problems. How would you make yourself be heard?

Webern did two things as a composer to make himself be heard: the first is that he didn’t try to drown out the noise by making music that was extremely loud or aggressive. Instead he responded by creating quite soft and gentle music, usually in very short pieces for pretty sweet sounding instruments. Maybe he was saying that when you can’t scream louder than everyone else, you can make yourself heard by whispering.

The second is that he created hyper-organiz​ed music. He used several systems organize and structure his music but the most famous one was called “12 tone music.” It’s really pretty simple. You write a sequence of twelve different notes — all the notes of the chromatic scale — and number them 1 through 12. Then you use them in order. You can also reverse the order or play other mathematical gam​e​s with the ordering of the notes. And it does really seem like a game. At the end though everything in a piece is related to the original order of the notes. That mean that there is a sense of belonging among the notes — a sure knowledge of what should go where.

Does that sound overly calculating? Maybe it does. But imagine living in a world where nothing made sense, where random violence and chaos waited around every corner.  Webern made music — and saved his sanity — by making extremely orderly music. However loud and crazy it was in the world, he could find peace an a beautifully and elegantly ordered inner world.

Did the kids ever enjoy making up their own games with Steven Schick and our Program Director Mason Dille!! One of those went something like this: “Imagine having a conversation using only three words at a time.” Such is the spirit of Webern’s compositions, put into a context that young people can not only understand, but enjoy — and perhaps even teach others about?! 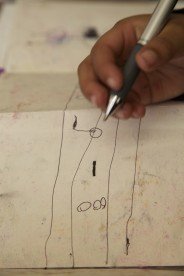 In the workshops, the students are guided by the two organizations’ collaborative creative team through an inquiry-based creative process that will be fueled by their exposure to: 1) the original Webern Concerto, 2) detailed visual arts-based workshops with ArtSeed and SFCMP staff, 3) exposure to the performing artists’ creative process (“building a concert” via rehearsals), 4) ongoing contact with SFCMP staff in a teaching role; and importantly 5) the students’ own artistic inquiry and reaction.

ArtSeed is developing and delivering a series of 10 school-based workshops at the SF Public Montessori School in fall, 2013 around the life and work of composer Anton Webern. Students will be led through an introduction to Webern’s work and aesthetic, and will be led by ArtSeed instructors in creating visual art works in “response” to the work and musical movement.

Our project will culminate in two public performances of Pointing Twice on March 24, 2013, with the World Premiere at the Yerba Buena Center for the Arts Forum in San Francisco preceded by a “Contemporary Insights” educational performance for the public the day before. The artwork by the young artists will be scanned by ArtSeed staff and integrated into the evening through projection. Physical exhibitions of the children’s artwork are being explored. Participating students and their parents will be invited to dress rehearsals and the concert evening.

Supported by the National Endowment for the Arts