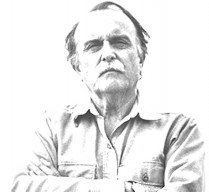 During an era when most contemporary music was preoccupied with the organization of pitch, since the mid-1960s the music of Alvin Lucier (b. 1931) has pursued a decidedly separate path.  Turning his focus inward to the very nature of sound itself Lucier’s work is revolutionary for its exploration of the physicality of sound as locus for compositional thought.  Employing various technological means his works explore the interaction of sound with space, bringing together human performers with technical apparatus to reveal worlds hidden within the soundscape of everyday life.  Through inventive and imaginative use of basic studio technology Lucier’s compositions coax surprising sonic complexity from everyday situations and environments seeking sounds that “would never – in ordinary circumstances – reach our ears”.

Alvin Lucier was born in Nashua, New Hampshire and educated at Yale and Brandeis before studying with Lukas Foss and Aaron Copland at the Berkshire Music Center.  After spending two years as a Fulbright Scholar in Rome he returned to Brandeis serving on its faculty throughout the 1960s as conductor of the University Chamber Chorus and as director of its electronic music studio.  It was there that he met and formed an alliance with Robert Ashley, David Behrman and Gordon Mumma to form the Sonic Arts Union, which, inspired by the prior success of Cage and Tudor, would tour the United States and Europe premiering new works. By the early 1980s Lucier began to compose for instrumental performers and these works are equally visionary in their conception.  Some explore close tunings with pure tones to cause sound waves to “spin through space” while others employ whimsical apparatus to probe new modes of listening and dramaturgy.