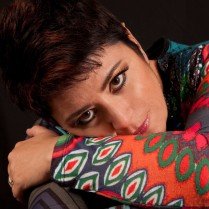 Gabriela Ortiz Torres was born in Mexico City of parents who were folk musicians. She learned folk music at home, and then studied in Paris at the Ecole Normale de Musique. She returned to Mexico City due to the illness of her mother, and studied composition there with Mario Lavista at the National Conservatory of Music. She continued her studies at the Guildhall School with Robert Saxton, and with Simon Emmerson at the University of London where she received a PhD in 1996. After completing her studies, she took a position at the National School of Music at the National Autonomous University in Mexico City. She also taught at Indiana University in the United States.

Ortiz was commissioned by SFCMP as part of Project TenFourteen – four concerts with world premieres from ten distinctive composers all challenged to “reflect upon and address the human condition, common to us all.”

“Corpórea is going to be about the duality between the mind and the body and is going to be dedicated to the Mexican diplomat Gilberto Bosques Saldívar (1892-1995), who took the initiative to rescue tens of thousands of Jews and Spanish republicans exiles from being deported to Nazi Germany or Spain. His heroism remained unknown to the world. Many friends as well as the Spanish grandfather of my husband Alejandro came to Mexico because of him.”

Get to know more about Gabriela Ortiz: