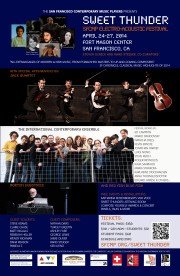 April 24-27, 2014
SFCMP brings some of the nation’s leading interpreters of contemporary music to San Francisco. Alongside SFCMP, the Bay Area’s “premier new music ensemble,” guests include:

Full Festival Pass: $100 ($40 student rate, with I.D.) Enjoy all six concerts, and hang around the Fort Mason grounds to visit Viva Voce, the Sweet Thunder Listening Room, and partake of this recent gorgeous spring weather at one of San Francisco’s most beautiful venues! Click on the image to the right to get your pass!

Single Tickets: Click on the concert below to purchase a single ticket. All seats $20 / Student rate: $10.Online ticket sales for concerts close at 5pm the day of (the day before for matinees). Walk-up Tickets are always available for any concert. Seating is open for all events.

COMPANION TICKETS available for any ticket purchaser – for $5 you can purchase an additional ticket and share the music you like with a friend. This offer only available for walk-up sales and one companion ticket per ticket holder per concert.

7:30 pm – JACK Quartet – SFCMP’s Sweet Thunder Festival opens with a concert by special guests JACK Quartet. Works will include Turgut Ercetin’s String Quartet No. 1;  Palimpsest , a new work by Kevin Ernste, the West Coast premiere of Natacha Diels’ Nightmare for JACK, and in a tribute to the late Jonathan Harvey, a performance of his String Quartet No. 4. FMC Festival Pavilion.

10:00 pm – Morton Subotnick – our special guest, the pioneering electronic composer Morton Subotnick, will perform his seminal work From Silver Apples of the Moon to a Sky of Cloudless Sulphur IV: Lucy in a special concert. His Silver Apples of the Moon (1967), recently entered in the Library of Congress National Recording registry, has inspired a generation of young electronica musicians. Do not miss this very special event with the “Grandfather of EDM.” FMC Pavilion. (N.B.: The Afterparty has been cancelled)

12:30 pm – Compose Yourself – The Awards Concert of SFCMP’s international high school composer competition will celebrate the next generation of composers with a performance of the finalist works by SFCMP ensemble members along with an awards ceremony. FMC Festival Pavilion; free.

Thanks to our Sponsors!