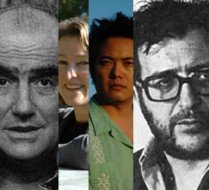 Sunday, February 22, 2015 – Project TenFourteen: Concert #3 – The third concert of Project TenFourteen featured the world premiere of we turn in the night in a circle of fire by Laurie San Martin as well as a new work by Ken Ueno, Zetsu. Also on the program were two iconic works of the 20th century: Luciano Berio’s  Linea and Luigi Nono’s Hay Que Caminar Soñando. Steven Schick led the SFCMP ensemble with guest violinist Gabriela Diaz at Cal Performances Hertz Hall in Berkeley.

Laurie San Martin – we turn in the night in a circle of fire – WP, Comm

About the works on this concert

The title of Laurie San Martin’s we turn in the night in a circle of fire, a translation of a Latin palindrome, suggests one of the work’s architectural motifs, which relates to events in her own life. “I was thinking about memory, hearing things backwards, forwards, hearing them in a new way, and how over time, as we age and even pass on, the same idea (or tune or gesture) takes on a different meaning…. I started thinking about the idea of hearing the same information (tune or chord or passage) differently….” This two-violin concerto, her most personally innovative work to date, was written for SFCMP violinist Hrabba Atladottir. The score is dedicated “In memory of [the composer’s mother] Marilyn San Martin and [the violinist’s mother] Elisabet Erlingsdottir,” and some of the musical content is derived from those names. Strong, compelling gestures range in character from clearly articulated pitches and rhythms to subtle, unstable, unpitched noise, and is presented in four contrasting movements. The two violinists work in close cooperation virtually throughout, in balance with the ensemble.

In 1958 Luciano Berio embarked on his cycle solo Sequenzas, and beginning in the late 1960s developed one of his most persistent concepts, using several Sequenzas as armatures for his Chemins ensemble works. (A related idea can be found in Berio’s use of the scherzo from Mahler’s Second Symphony in the third movement of his celebrated Sinfonia.) Composed in 1973 for Felix Blaska’s dance company, Linea applies the armature idea to “pure” melodic line: texture and harmony burst forth from single pitches like sparks from a fire. The line evolves continuously, cycling back to itself through several distinct episodes in ways analogous to variation or rondo form, and the combination of two pianos and two mallet instruments create a marvelous variety of colors.

Originally among the purest adherents to serialism, Luigi Nono ultimately charted a course further removed from tradition than virtually any of his contemporaries. His starkly political works of the 1960s and early ’70s were models of sonic saturation; his late works, from the string quartet Fragmente—Stille, an Diotima onward, are ascetic and acoustically transparent. The Spanish motto “Caminantes, no hay caminos, hay que caminar” (roughly “Pilgrim: there are no roads; one must walk”), informed several works, including his last, “Hay que caminar” soñando. Composed for Gidon Kremer and Tatiana Grindenko, this piece, like its solo predecessor La lontananza nostalgica utopica futura, sends its performers through onstage musical “stations,” the spatial aspect and extreme articulative detail of the violin parts reflecting Nono’s recent immersion in electronic music. The details of violin performance are ultimately rooted in Gidon Kremer’s playing. As with Fragmente, the pitch material is based, unexpectedly, on Giuseppe Verdi’s “enigmatic scale” from his Ave Maria.

The American composer Ken Ueno’s new pocket violin concerto Zetsu is a continuation of his “person-specific” compositional philosophy and is tailored to the San Francisco Contemporary Music Players and the composer’s longtime Boston-based colleague, the violinist Gabriela Diaz. It also illustrates his wide-ranging cultural curiosity. The title comes from a ceramics work in Boston’s Museum of Fine Arts, Zetsu No. 8 by the late Japanese sculptor Nishida Jun, whose dangerous working methods led to new forms combining predictable, structured elements with unstable, amorphous traits. Nishida Jun’s extreme methods led to his death when a kiln exploded; Ueno’s music seeks to honor this level of aesthetic risk-taking. In addition to the subtlety and detail of the strongly motivic violin part, Ueno creates unique sonorities within the ensemble, including specially tuned percussion, the “hookah-sax” (saxophone played via a plastic tube inserted in the bell), and in imaginative combinations of performance techniques. The extension and contraction of time in Zetsu variously focuses and diffuses the music’s semantic detail.

Under the artistic leadership of internationally acclaimed musician and educator Steven Schick, SFCMP 2014-15 season was anchored by Project TenFourteen – four concerts with world premieres from ten distinctive composers all challenged to “reflect upon and address the human condition, common to us all.” The ten composers participating in this project are of extraordinary caliber – George Crumb, Elena Ruehr, Gabriela Ortiz, Ken Ueno, Gabriela Ortiz, Du Yun, Agata Zubel, Koji Nakano, Lei Liang, Laurie San Martin, and Chou Wen-Chung. Collectively, they represent cultures ranging from China, Japan, Taiwan, and Thailand, to Mexico, Poland, and several regions of the U.S. and span music styles from lyric to extended techniques to the forefront of electro-acousticism.

The four concerts — in November 2014 and January, February and March 2015 — took place at Hertz Hall on the UC Berkeley campus. They were presented in collaboration with Cal Performances. A pre-concert talk preceded each performance, and a post-concert reception allowed audience members to engage with the composers and artists.